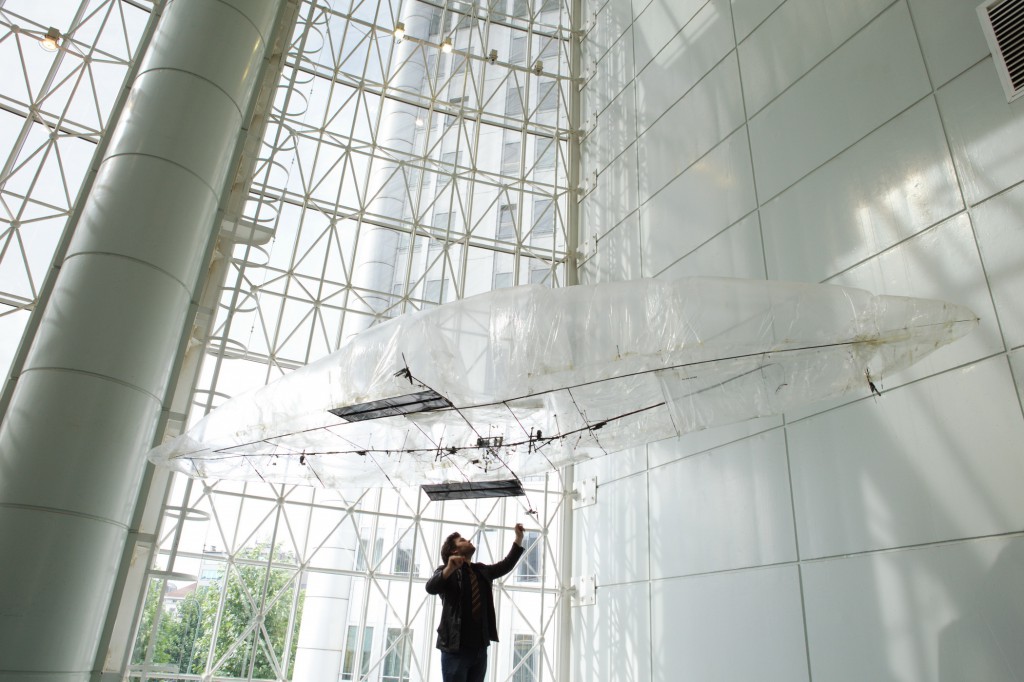 Lieven Standaert was trained as an engineer in architecture at the University of Ghent, Belgium, then went on to study industrial design at IPO in Antwerp. The project grew as a manifesto for designer-driven innovation. It evolved into a story of a hands-on, experimental and pragmatic approach for building a radical, non-compromising concept.

Today a designer can create the most amazing CG renderings of the most fantastic concept he can think of. But how do you get a 90-meter , experimental, zero-emission, biomimicry airship actually built… if you’re only a single, young designer with a single, young-designer’s bank account?
Part of his answer is going one step at a time…

His models are currently on display at the Verbeke Foundation, Belgium. He is coordinating research projects with the Vrije Universiteit, Brussels, where he designed and built the new low-speed wind tunnel, and is developing custom-built CNC-tools with timelab, a Ghent-based fablab.
He wears a T-shirt with Buckminster’s face on it.


The Aeromodeller2 is a design for a zero-emission, autonomous, nomad hydrogen-based airship that will never land.

“Aeromodeller2, a work as poetical as it is ambitious and thought-provoking. ”
Regine from we-make-money-not-art published an interview with me. You can find it here:

Lowtechmagazine did a feature on the airship way back in 2009. I met Kris later after a lecture. He is a great technology writer and I really love his site:

If you wish to be informed on progress into the project, upcoming exhibitions or events, you can subscribe to the newsletter HERE .

This link will compose an email with the subject "newsletter subscription'. It can be sent blanc.

Alternatively you can manually send an email to inschrijving@aeromodeller2.be with the subject 'newsletter subscription'.