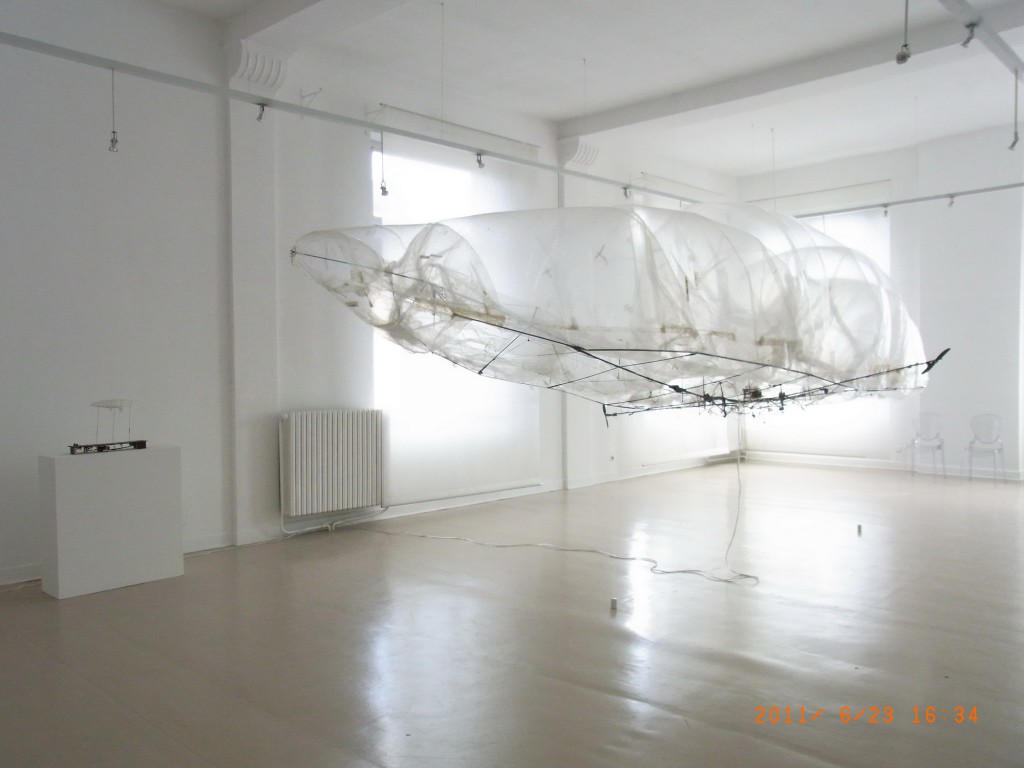 The expo is called “Machines Improbables”, and exhibits vehicles from various artists. There are drawings and models from Luc Schuiten, 2 pieces from Panamarenko, work from Frank Giffroy , Raphaël Opstaele and Lieven Standaert. On the first floor Lieven Standaert is showing the 9-meter model that was built at the Verbeke Foundation, together with a small demonstration model and a series of drawings.

You’ve built this model in the Verbeke Foundation, where you showed the model as an ongoing experiment,  a work-in-progress. Now you present it as a stand-alone object in a classic, clean museum setting. It is a very different context, and the idea of a work-in-progress was very much part of your story. How does this change things?

I’m still evaluating how this setup here is perceived, and I’m a bit in two minds about it.
I met Luc Schuiten here. I had seen his drawings, and his little models, but didn’t know his work very well. Early in July he was explaining his work and turns out he is a great raconteur. I don’t have any great affinity with his art-nouveau aesthetics, but I loved hearing him describe a vision for a slower, theatrical, green city. In his stories he creates a world, for which the drawings are illustrations. I talked to him afterwards, and he argued the drawings should stand on their own, but I really wanted the explanation. I want the architectural kind of presentation of someone illustrating and explaining his ideas.  Without the world envisioned behind them, to me the drawings are just pretty pictures.
This got me thinking; I’m more or less in the same boat. When I started presenting the model at Verbeke, this gave me the opportunity to explain what it was about. It was very much about defending the feasibility of what I proposed to build. These explanations grew into a story where, like Luc Schuiten’s drawings, the model is a small piece in a larger vision.
When people see an airship model in a Belgian museum, most of them have clear preconceptions about what they think it is, on a technological level.  So if I then start talking about it, explaining what I’m testing out on the model, explaining what the small water models are about, why the shape I designed is easier to scale up, when I show them the video’s of the hydrogen experiments… some of them get bored and walk on. But others get to a point where they think “Wait a minute, this guy is serious about this. And he seems to know what he’s talking about. Maybe, just maybe, this thing might actually work…”
That is a very powerful moment. I start from an underdog position, and change people’s minds. Starting from an extremely blue-sky idea and explaining a very pragmatic approach is what creates the story arc in my presentations. Learning to do this was a very nice experience, but it also made me part of the exhibition.
In the La Louvière exhibition I’m not even showing the presentation posters, there’s only a short text explaining the model.
The model is presented as a silent object, floating in a white room. People enter the room, and the model is hanging close up to them, the room is only just big enough to walk around the model.  If you’re not too tall, you can walk under it. You see the carbon structure, the motors and the control systems. The electronics aren’t activated; the room is too small to fly in it. 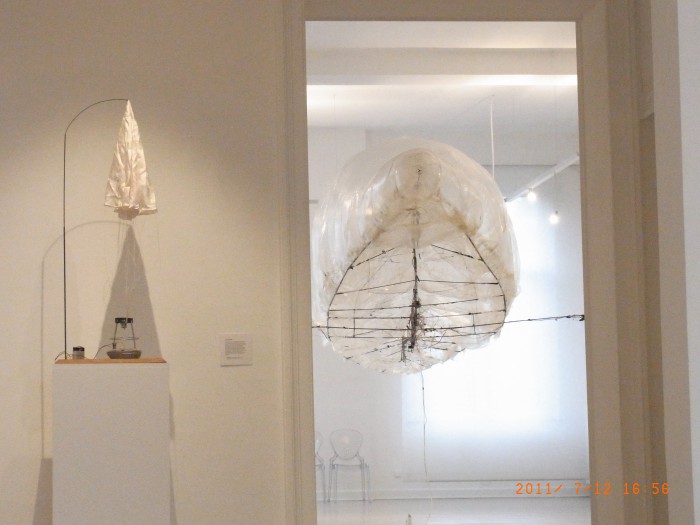 At some point, people look up and try to find the wires suspending the model from the ceiling. Then they realize there aren’t any. There are only two wires going down, holding the model in place.
There are two tubes going into the model, refilling it a bit every day, keeping the airship weightless for the entire length of the exhibition.
So II’m still playing on people’s preconceptions about technology and art, but in a more restrained way.  When I’m sharing an exhibition with Panamarenko, this setup seemed like the sensible thing to do. Not as a provocation, not in a showy way, but as a simple statement:
“Of course it flies”.

But you don’t believe it stands’ on it’s own, without your explanation?

I really don’t know. I hope it does. I hope it impresses people enough that they go looking for the ideas behind the object. But to me it feels like something gets lost. I called it a more ‘restrained’ presentation, and that’s very much how it feels to me. I have to actively restrain myself to remain silent and not fill up the entire space with explanatory panels, video’s ….  I want to explain, I want to talk about it, what I tried on it and what I’m testing on it now. I do very much want to talk about the process and the research. Presenting it as a finalized object might in the end not be my thing.

You’re still working on that model?

That is the other difference with a place like the Verbeke Foundation. Verbeke for me is very much an ever-changing workspace.The model was not conceived as a maquette, it was an experimental model I used to test the structure and the forces working on the model in flight. I’m trying to tell a story of technology as a work-in-progress, as a series of hands-on experiments and iterative improvements.
And now I’m here, and I’m de facto presenting it as a finished object in a white room. They really don’t expect me to be tinkering with the work, once the exhibition opens. But somehow I end up spending my Sunday afternoon, in the exhibition, replacing the old soldered-together winches with smoother, more reliable ones. The cables I used to defrom the structure were wearing out from friction and now I found these nice coated ones which are much better. And at those moments, lying on my back under the model with some pliers and a toolkit, it all feels right.
Obviously, at some point, I want to work on the next prototype. This summer I’m working on a couple of small balloons I can use for outdoor testing, and I want to build a test stand for wind rotors, so I really should stop myself from tinkering on that old model and call it finished…
That is of course not an uncommon tension in art. If I have this to a higher degree than most, that is because, for me, the strength of presenting this work in an arts centre, is that it allows me to show failures and mistakes. Present a less macho and more fragile idea of invention. Don’t hide your mistakes and failures, but show a more realistic story of research and development. And in the end be stronger because of that.
Only,those mistakes are part of a process. You don’t leave the mistakes, you explain what went wrong, what you learned from it and you fix it. You keep going at it.
There is no fixed masterplan, there is only an ongoing process of searching how you can make this work, both technically and as a development methodology.

People keep asking me how long it will take me to build the full-scale airship and I have a couple of timelines, including one where I have all the funding I could wish for. So I used to give a long answer, give a definite timing and budget, then tried to explain that it’s more complicated than that. That the whole point was deciding what you do when you don’t have all the money you wish for and you need to manage your resources.  Be small. Cut the big project in little pieces and realize one piece at a time, but get it off the paper.

I recently realized I can give a simple, one-sentence answer. And it is: “As long as it takes…”  A deadline is a tool, not a goal. I always assumed I needed to formulate a deadline to be serious about this, but it always felt artificial.
Like a Sam Dillemans painting, it will be finished when it’s darn well good enough. I’m chasing an idea I’m passionate about and think is worthwhile working on. If it takes 10 years to get it done, then it takes 10 years. That’s just how it is.

The Aeromodeller2 is a design for a zero-emission, autonomous, nomad hydrogen-based airship that will never land.

“Aeromodeller2, a work as poetical as it is ambitious and thought-provoking. ”
Regine from we-make-money-not-art published an interview with me. You can find it here:

Lowtechmagazine did a feature on the airship way back in 2009. I met Kris later after a lecture. He is a great technology writer and I really love his site:

If you wish to be informed on progress into the project, upcoming exhibitions or events, you can subscribe to the newsletter HERE .

This link will compose an email with the subject "newsletter subscription'. It can be sent blanc.

Alternatively you can manually send an email to inschrijving@aeromodeller2.be with the subject 'newsletter subscription'.